Saladin is a campaign in Age of Empires II: The Age of Kings. The campaign is based on the exploits of An-Nasir Salah ad-Din Yusuf ibn Ayyub, called Saladin by Europeans (1137 – March 4, 1193), who founded the Ayyubid dynasty of Egypt and Syria and led the Muslims to recover Jerusalem from the Western Crusaders who had held it for almost a century.

5
Saladin is a cavalry hero in Age of Empires II HD: The Forgotten. Being introduced later, he naturally never appears in his campaign and is only available in the Scenario Editor.

In-game, he is represented by a Mameluke. As a hero, he cannot be converted and can regenerate health.

The Saladin campaign consists of 6 scenarios. The player plays as the Saracens, and the player color is green.

The campaign is narrated by an anonymous knight from Normandy who gets lost in the desert while en route to join the Crusader invasion of Egypt. He is found by, and surrenders to, Saracen horse archers (who he initially mistakes for Turks), and they take him to their leader, the titular Saladin. The knight soon becomes fascinated with the chivalrous Saladin and Saracen civilization in general. Years later, he chooses to turn down Saladin's offer to recover his freedom and continues serving him willingly.

Saladin (or at least his Saracen forces) appears as an opponent in the last two scenarios of the Barbarossa campaign. Since it depicts the Third Crusade from the Holy Roman Empire's point of view, Saladin appears as one of the enemy factions the player will encounter. Like in his own campaign, Saladin's forces are represented by the Saracens under the color green.

A painting of Saladin; unknown artist 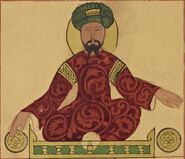 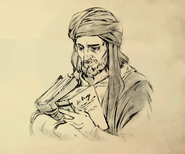 The narrator of Saladin's campaign

As he appears in the original Age of Empires II

As he appears in the Definitive Edition