Age of Empires Series Wiki
Register
Don't have an account?
Sign In
Advertisement
in: Unique units, Dutch, Age of Empires III,
and 2 more

The Ruyter is a ranged light gunpowder cavalry unit in Age of Empires III that is unique to the Dutch, which replaces the Dragoon, and can be trained at Stables, Forts, and Fluyts once the Fortress Age is reached.

The Ruyter wields pistols in combat and works best in groups to eliminate groups of heavy cavalry and hand shock infantry. Compared to the Dragoon, they operate almost identically in combat, albeit with lower individual stats. They counter artillery at range, but fare even better if set to melee mode, as long as the enemy does not have heavy infantry in melee mode guarding the cannons, in which case stagger mode would be best.

However, Ruyters take only 1 population slot, making them very population effective. It is also one of the Dutch Royal Guard units, meaning each unit can be upgraded higher than other Dutch units. They are also significantly cheaper, as coin is barely an issue for Dutch players due to the presence of Banks. The Ruyter costs mainly coin, and thanks to the Dutch Settler sharing the coin resource cost, the Ruyter fulfills a similar economic niche to Musketeers within standard civilizations, which use Food for both of those units of theirs. Finally, Ruyters work well with the Dutch infantry units because they all benefit from Arsenal upgrades. Be sure to research Ranged Cavalry Caracole to help improve both their offensive and defensive capabilities.

The Ruyter starts at the Veteran level, giving them +20% hit points and attack.

If they are made available in the Commerce Age with the "TEAM Early Dragoons" Home City Card, Ruyters will be automatically upgraded to Veteran once the player reaches the Fortress Age.

As Ruyters are unique to the Dutch, only technologies that they have access to are shown in the following table:

As Ruyters are unique to the Dutch, only their cards and other civilizations' TEAM cards are shown in the following tables: 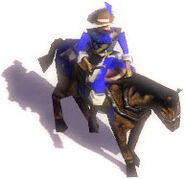 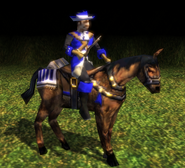