Tambo on a House of Oldenburg palace

7 per House of Oldenburg palace

The Royal Huntsman (Royal Hunter after researching League of Armed Neutrality) is a ranged infantry villager native warrior in Age of Empires III: Definitive Edition - Knights of the Mediterranean that can be trained at a Trading Post built on a House of Oldenburg palace.

The Royal Huntsman is a ranged infantry unit that also fulfills the role of a villager. It is effective against Skirmishers and other light infantry units, but vulnerable against cavalry and artillery.

Royal Huntsmen perform the role of improved Settlers, as they have higher ranged attack, melee resistance, and slightly higher speed, but an increased food cost, no multipliers against artillery, have a build limit and slower training time. Royal Huntsmen only gather food from huntables, which also contributes to the players' early economy, and since they are tagged as villagers, upgrades like Blunderbuss and Hunting Dogs will benefit their attack and gather rate, respectively. Additionally, they have a ranged attack with bonus damage against light infantry units, such as foot archers and Skirmishers. However, their low damage, build limit, and hit points makes them unsuited to handle large groups of units, and they will be especially weak against Oprichniks, since they have a multiplier against villagers.

Royal Huntsmen can become Royal Hunters after researching the League of Armed Neutrality technology. Royal Hunters move slightly slower and can no longer gather food from huntables, but they do not take population space, increase their ranged damage, Line of Sight, maximum range, and build limit, and since Royal Hunters are no longer considered villagers, they will not take additional damage from Oprichniks.

The Indian Friendship card ships 2 Royal Hunters if the player had built a Trading Post on a House of Oldenburg palace. 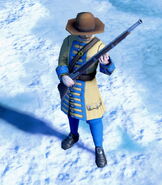 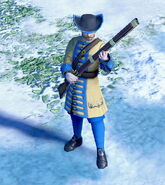