Tambo built on a House of Bourbon palace

The Royal Horseman is a mercenary heavy cavalry unit in Age of Empires III: Definitive Edition - Knights of the Mediterranean.

The Royal Horseman is available as one of the randomly available mercenary units of a given map, or in the House of Bourbon minor civilization on European maps using a Trading Post after researching the Maison du Roi technology in the Industrial Age. It functions as a mercenary version of the Cuirassier, costing 1/3 more resources and population total, while offering significantly more hit points, slightly higher attack, and a larger area of effect.

While its cost can be quite prohibitive, it will, just like the Cuirassier, serve as both an excellent damage sponge and a terrifying counter against even highly upgraded infantry with low hit points. It should especially be considered when playing Germans, as their primary cavalry unit is more fragile than usual, and they can upgrade mercenaries' HP/attack and reduce their cost using Home City shipments. When accessed by using the Maison du Roi technology, it greatly synergizes with the Spanish getting Home City shipments quicker. Considering that the technology costs less than two times the amount of a single Royal Horseman, it will pay off very quickly. It will also greatly increase the value of infinite mercenary shipments in the Industrial Age for either civilization.

Royal Horsemen may spawn as one of the 8 random mercenary units after researching Multinationalism.

Haudenosaunee can train Royal Horsemen and receive one with every new shipment after reserching Maison du Roi.

Incas can train Royal Horsemen and receive one with every new shipment after reserching Maison du Roi.

Lakota can train Royal Horsemen and receive one with every new shipment after reserching Maison du Roi. 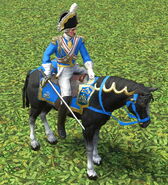