Age of Empires Series Wiki
Register
Don't have an account?
Sign In
Advertisement
in: Article stubs, Age of Empires III, Infantry,
and 3 more

Tambo on a House of Vasa palace

14 per House of Vasa palace

The Royal Arquebusier is a ranged infantry native warrior in Age of Empires III: Definitive Edition - Knights of the Mediterranean that can be trained at a Trading Post built on a House of Vasa palace.

Royal Arquebusiers are ranged infantry units. They are available starting in the Commerce Age, effective against heavy infantry like Musketeers, but are vulnerable against melee cavalry and artillery. In comparison with other ranged infantry (like the Crossbowman or the State Militia), the Royal Arquebusier is similar in terms of range, speed, Line of Sight, and train time, has less ranged attack and increased food cost, but higher hit points, slightly higher melee attack, and resists melee damage. 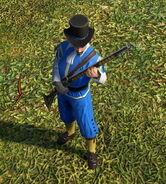