4
Robert Guiscard (c. 1015 – 17 July 1085) is an cavalry hero unit in Age of Empires II: Definitive Edition - Lords of the West. As a hero, he cannot be converted and can regenerate health.

He is present in the scenario Guiscard Arrives of the The Hautevilles campaign, and also makes a brief cameo in Bohemond in the East.

His sobriquet "Guiscard", in contemporary Latin Viscardus and Old French Viscart, is often rendered "the Resourceful", "the Cunning", "the Wily", "the Fox", or "the Weasel". In Italian sources he is often Roberto II Guiscardo or Roberto d'Altavilla (from Robert de Hauteville), while medieval Arabic sources call him simply Abārt al-dūqa (Duke Robert) 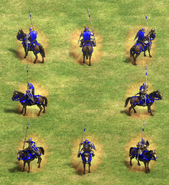 Robert seen on the left in the official box art of Lords of the West
Community content is available under CC-BY-SA unless otherwise noted.
Advertisement