The Rifle Rider is a gunpowder cavalry in Age of Empires III: The WarChiefs that is unique to the Lakota and can be trained at the Corral once the Fortress Age is reached.

The Rifle Rider is one of the most significant units available to the Lakota. These units are the Lakota version of a Dragoon, but unlike Dragoons, they are good against heavy infantry. They are more expensive, move slower and deal less damage than a dragoon, but their 1.5 ROF means they shoot 50% faster. This means they can easily kill large numbers of heavy infantry units in a short period of time.

Though they are very well rounded, they fare poorly against light cavalry. This is because unlike most cavalry, they are classified as both light and heavy, against whom light cavalry has a multiplier.

It is a good idea to combine a group of Rifle Riders with several Axe Riders; Rifle Riders are one of the most powerful units in the game. However, Dragoon-like units will make short work of them due to multipliers.

The Rifle Rider starts at the Elite level, giving them +25% hit points and attack.

If made available at the Commerce Age with the "TEAM Early Dragoons" Home City Card, Rifle Riders will be automatically upgraded to Elite when the player reaches the Fortress Age.

As Rifle Riders are unique to the Lakota, only technologies that they have access to are shown in the following table:

As Rifle Riders are unique to the Lakota, only their cards and other civilizations' TEAM cards are shown in the following tables: 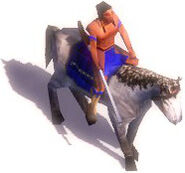 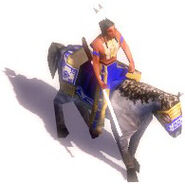