Infinite source of food or coin

The Rice Paddy is an economic building in Age of Empires III: The Asian Dynasties that is unique to the Asian civilizations (Chinese, Indians, and Japanese). It combines the functions of a Mill and a Plantation by acting as an infinite source of food and coin, but not both; the Rice Paddy must be configured to provide either resource at one time.

Although the gather rates of Rice Paddies are slower than Mills and Plantations (0.5 food and 0.34 coin), Villagers gathering from a Rice Paddy do not wander around, thus eliminating the need to "optimize" the gather rate by limiting each Rice Paddy to be gathered by up to 7 villagers.

"The evolutionary origins of Rice, the genus oryza, are rooted in such distant history that no exact geographic location has been defined as the true source. A popular theory claims that the ancient supercontinent known as Gondwana, which included most of the landmasses in today’s southern hemisphere, was home to oryza; but when Gondwana split into pieces 200 million years ago, rice traveled with the newly created continents and landforms, populated the new continents and islands that became Africa, South America, Antarctica, Australia, New Zealand, India, and Madagascar.

A rice paddy is an arable selection of land planted with rice seed that is flooded, providing the large amounts of water essential to rice growth. The paddy is irrigated by diverting water from rivers and mountain streams into a complex network of canals developed over years of use. Rice farmers often terrace the paddies up a hillside or slope, which conserves water by allowing it to flow down through successive rice fields. Rice seed is usually planted in a seedbed but transplanted to the paddy as a young plant. The water level begins at a depth of 6 inches, but as the plant grows, farmers gradually drain the water. By harvest time the water is almost entirely drained, and the farmers can collect the rice from the dried fields.

Fifty percent of the world’s rice is grown in paddies that are fed by natural rainfall; thirty-five percent comes from paddies flooded by both rainfall and irrigation. The major rice-producing countries - including China, India, and Vietnam - primarily cultivate paddy rice." 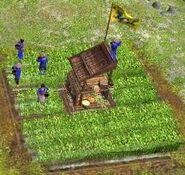 Unused Indian Rice Paddy portrait
Add a photo to this gallery
Retrieved from "https://ageofempires.fandom.com/wiki/Rice_Paddy?oldid=260086"
Community content is available under CC-BY-SA unless otherwise noted.