Age of Empires Series Wiki
Register
Don't have an account?
Sign In
Advertisement
in: Age of Empires III, Age of Mythology, Egyptian units,
and 6 more

5-10
The Rhinoceros is a huntable animal introduced in Rise of the Rajas. It is found in maps set in South East Asia (and in the Definitive Edition also in Africa). A powerful animal, it will viciously defend itself against any attacker, but as it provides 400 food, it is one of the most valuable animal food sources in Age of Empires II.

It is worth noting that unlike other similarly aggressive huntable animals such as the Elephant or the Wild Boar, the Rhinoceros may often be found in packs, sometimes up to three. 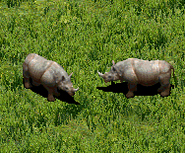 10
The Rhinoceros is the second largest huntable animal in Age of Mythology, only beaten by the Elephant. It will not attack Villagers on sight, but will defend itself if attacked and a group of villagers will be needed to hunt them.

The Rhinoceros of Set is the largest animal that Pharaohs worshiping Set can train with a cost of some favor. They are available in the Mythic Age, and can cause great damage.

1.5
The Rhinoceros is the largest land animal Treasure Guardian in Age of Empires III. Rhinoceros have high hit points and a strong attack, and are found in Asian maps.

There is also the Pet Rhinoceros known as Randy the Pet Rhino, available to the Indians from their Home City, or from a Treasure guarded by five Black Panthers. 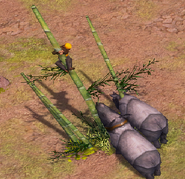 1.5
Randy is a pet Rhinoceros in Age of Empires III: The Asian Dynasties. He is one one the strongest pets in the game, as is capable of inflicting a fair amount of damage against Treasure Guardians, though he is incapable of delivering heavy damage to Settlers.

Randy is tied with Honcho the Pet Grizzly Bear for the most damaging attack among pets, though Randy has a much lower multiplier against Treasure Guardians. A TEAM shipment of two Rhinos is available to an Indian Home City, from the Commerce Age on. Randy can also be rescued from Treasures on Southeast Asian maps such as Borneo and Indochina.