6
Reynald de Chatillon (c. 1123 - July 4, 1187) was a Burgundian Knight and Crusader of relatively humble origin who gained great military and political influence in the Kingdom of Jerusalem between the Second and Third Crusades. He appears as an enemy cavalry hero in two scenarios of the Saladin campaign of Age of Empires II: Lord of Arabia, in which he is the main antagonist, and The Horns of Hattin, in which he can be fought and killed. He is also available in the Scenario Editor.

Chatillon has the appearance of a Knight armed with a lance, similar to other hero units. He is affected by cavalry technologies but not civilization bonuses. As a hero, he cannot be converted and can regenerate health (since The Conquerors). 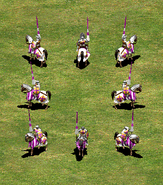