1
The Relic Cart is an untrainable unit in Age of Empires II: The Forgotten. It is only available in the scenario Editor.

Unlike regular Relics, Relic Carts do not have to be picked up by a Monk, but can move on their own. The Relic Cart can be captured by any player, similar to its counterpart in Age of Empires, the Artifact, or the Monument. It cannot be stored in a Monastery.

Also, unlike regular Relics, Relic Carts can be damaged such as by towers, and they can be loaded in Transport Ships. When the Relic cart loses all its HP, it should convert to a normal relic, but becomes an uncontrollable gaia relic cart which has random motions. A Relic Cart takes only one damage from all combatant units and buildings per projectile/attack.

A Relic Cart makes an appearance in the Sundjata campaign's second scenario, The Sting of the Scorpion, representing Sundjata's baobab stick. The Relic Cart also appears in The Dai Viet Uprising, on the pirates' island in the east. 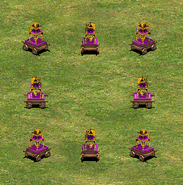 A group of Relic Carts 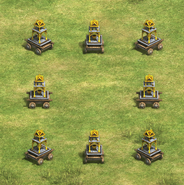 Ditto, in Age of Empires II: Definitive Edition.
Add a photo to this gallery
Retrieved from "https://ageofempires.fandom.com/wiki/Relic_Cart?oldid=313391"
Community content is available under CC-BY-SA unless otherwise noted.