Relics are magical objects in Age of Mythology that each confer a different bonus to a player once garrisoned in a Temple. Players can collect and garrison multiple Relics, though each Temple can only store five each. They can only be picked up by heroes. Egyptian Priests can also pick up Relics once Hands of the Pharaoh is researched.

There are 49 types of Relic in Age of Mythology:

A Pair of Golden Lions[]

Effect: A pair of Golden Lions appears at a Temple; they respawn one minute after both are killed. Good early on in a rush, or for scouting.

Mythical reference: The story of Atalanta, who was turned into a lion (along with her lover) as a result of fornicating in a temple dedicated to Artemis. Could alternatively be a reference to Freya, whose chariot was pulled by a pair of giant cats.

Note: The relic always spawns two Lions at a time. If a single Lion has been killed, the other remaining must be killed as well for the pair to be complete again.

Effect: Produces a trickle of 2.4 favor per minute. Useful for all, but especially for the Norse early on.

Mythical reference: The ankh was a symbol of eternal life in ancient Egypt. Egyptian gods are often portrayed carrying it by its loop, notably Ra.

Mythical reference: Hephaestus was the blacksmith god and was commonly identified with an anvil.

Effect: Infantry units have 5% less vulnerability to hack damage. Only beneficial to a player who uses a lot of infantry.

Mythical reference: Achilles, the legendary Greek hero who was invulnerable in all but one spot - his heel. After the Trojan War, Ajax and Odysseus competed for possession of Achilles' armor.

Arrows of the Alfar[]

Mythical reference: Alfar is the Old Norse word for 'elves'. The elves lived in Alfheim ('Elfhome'), one of the nine worlds of Norse myth.

Effect: Villagers collect food from Farms 10% faster. A solid benefit to any player from mid-game.

Mythical reference: Asian folklore. The Lotus was regarded as a symbol of purity by numerous Asian cultures. It could also be reference to one of the most expensive cards in the card game Magic: The Gathering.

Effect: Gold and wood gather rates increased by 5%. A benefit that does add up over time.

Boots of Kick Everything[]

Mythical reference: Magical boots that grant the wearer super-speed are found in numerous fairy tales and myths. The name of the relic itself, however, is something of a joke.

Effect: Archer units cost 15% less resources, Trolls cost 15% less wood, and Centaurs cost 20% less wood. Also affects Throwing Axemen and Satyr in Age of Mythology:Tale of the Dragon. Any player who uses these units will get a significant saving.

Mythical reference: Artemis, the virgin Goddess of the Hunt, was a master archer.

Effect: Summons a Pegasus for free one minute after the Relic has been garrisoned. When killed, another Pegasus will simply respawn at the Temple after a minute. Vast improvement to scouting for the Egyptians, Norse, Atlanteans, and Chinese. For the Greeks, it can be beneficial to players who are still in the Archaic Age or do not prefer to select Hermes when advancing to the Classical Age, as it can save at least 50 food, 2 favor. Also note for the Greeks that this Relic will not spawn a Pegasus if the player has at least one existing on the map.

Mythical reference: Canopic jars were used in mummification in Ancient Egypt. Imsety was one of the four sons of Horus and is commonly depicted as a mummified man.

Mythical reference: The Catoblepas was a mythical beast from Greek folklore. Described as having the body of a bull and a shaggy, heavy head, its gaze or breath could petrify people.

Mythical reference: The Eye of Horus was a symbol of protection, good health, and royal power in ancient Egypt.

Reference: Ornlu, the alpha male wolf from the first scenario of the Genghis Khan campaign from Age of Empires II: The Age of Kings.

Effect: Worker units can kill nearly all wild animals in a single shot. Useful on some maps, as it means large or dangerous animals can be killed by just one worker.

Mythical reference: Gleipnir, the ribbon said to hold the monstrous wolf Fenrir (or Fenris) shackled until Ragnarok comes, when he would break free of its bonds.

Effect: Walls cost 25% less resources. Not much of a saving except for highly defensive players.

Mythical reference: The ancient Egyptian town of Buhen, known for its fortress.

Reference: In The New Atlantis campaign, Gaia wishes to imprison the Titans back into Tartarus.

Mythical reference: Hippolyta was the Queen of the Amazons. One of Heracles' Twelve Labors was to steal her girdle.

Mythical reference: As the name states, Grugnir (more commonly known as Gungnir) was the spear of the Norse god Odin.

Mythical reference: Harmonia, the Greek goddess of harmony and concord.

Effect: Scout units gain +2 Line of Sight. Most useful in the early game, but has little overall effect.

Reference: Harter's Folly may be an indirect reference to Harper's Folly, a fishing ground near Charleston, North Carolina, USA.

Effect: Buildings gain +8 Line of Sight. A benefit to any player, but especially defensive ones.

Mythical reference: Orpheus, the ancient Greek poet, musician and prophet who failed to rescue his beloved Eurydice from the realm of Hades.

Mythical reference: Hera, wife of Zeus and Goddess of motherhood and marriage. The Thundercloud Shawl in question is probably an allusion to her husband's role as God of Thunder.

Effect: Heroes' damage multiplier against myth units is increased by one. Makes Heroes even better against their target opponents.

Mythical reference: The khopesh was a type of curved edged weapon in ancient Egypt. Horus wielded a khopesh against Set in his bid for the throne.

Effect: Worker units move 10% faster. Always going to come in handy, especially for the Atlanteans, whose Citizens are particularly slow.

Mythical reference: The kithara was a Greek musical instrument, a variant of the lyre and ancestor of the guitar. Apollo was the God of Music.

Reference: Mithril is a fictional metal found in the writings of J. R. R. Tolkien, described as resembling silver but being stronger and lighter than steel.

Effect: Summons 3 Relic Monkeys 1 minute after garrisoning; they will respawn if all are killed. Definitely a bit of a joke, but the monkeys are adequate scouts.

Easter egg/reference: The Monkey Head is a recurring gag in the Age of Empires series since Age of Empires II. It is also a reference to the cheat in The Age of Kings, "I LOVE THE MONKEY HEAD".

Note: The relic always spawns three monkeys at a time. If a monkey or two has been killed, the batch of three will not be complete again until the last one (or two) has also been killed.

Nose of the Sphinx[]

Mythical reference: The Sphinx was a creature from Egyptian mythology that had the body of a lion and the head of a human or several other creatures. The nose is a reference to the modern-day Sphinx at Giza. Its nose fell off centuries ago.

Effect: Caravans are 25% cheaper and move 15% faster. Increases the generation of gold in the late game, which is typically very important.

Historical reference: Oseberg is the name given to a Viking ship that was discovered intact.

Mythical reference: Pandora's Box is a famous Greek myth about a woman who opened a box that she was forbidden from opening, causing all the evils of the world to be unleashed.

Mythical reference: Argus was a giant with a hundred eyes covering his body.

Mythical reference: Pygmalion was a sculptor in Phoenician-Greek mythology who fell in love with one of his creations, an ivory statue. The statue became a real woman when blessed by Aphrodite.

Mythical reference: Nekhbet was a Predynastic Egyptian goddess who resembled a vulture.

NOTE: This relic was deemed overpowered and was removed from the relic-spawn list from the Titans Expansion relics.)

Ring of the Nibelung[]

Effect: Produces a trickle of 18 Gold per minute. A small bonus, but better than nothing. This also has a similar effect to the Relic in Age of Empires II, albeit with a lower production.

Mythological reference: Nibelung was a member of the dwarven race who hoarded gold and magic, they were lead by the leader of the same name, and came from Nibelheim, Land of Mist. Whilst its name is a reference to Der Ring der Nibelungen, a Richard Wagner musical drama.

Effect: Rams, Scarabs and Behemoths have their attack multiplier against buildings increased by one. Also affects Fire Siphons in Tale of the Dragon. Makes these building-smashers even more dangerous.

Mythological reference: The scarab was a common symbol of Ra and pendants in its likeness were very common accessories among ancient Egyptians.

Effect: Houses and Manors have triple hit points. Makes the owner much less vulnerable to having their population cap compromised.

The game files indicate a multiplier of 1.5 for Manor HP.

Effect: Produces a trickle of 24 Food per minute. A slightly larger bonus than the Ring of the Nibelung.

Mythical reference: The Ship of Fingernails (Naglfar, 'nail ship' in Old Norse) was a mythical ship made entirely of the fingernails and toenails of the dead.

Historical reference: A sistrum is an Egyptian musical instrument. The sistrum can be seen being held by Bast in Egyptian hieroglyphs.

Effect: Villager units can carry 20 extra food. Helpful, especially when hunting. Of no use to the Atlanteans.

Historical reference: A Thrysus (a type of staff) was commonly associated with Dionysus.

Tail of the Cerberus[]

Mythical reference: Cerberus was the three-headed dog that guarded the Underworld in Greek mythology, keeping the dead in and the living out.

Effect: The Secrets of the Titans technology is cheaper. Helps give the owner the edge in building a Titan Gate first.

Effect: Archer units and Ballistae have 5% more attack. Also affects Throwing Axemen in Tale of the Dragon. Of some benefit to archer-heavy players.

Historical reference: A toothed (or broadheaded) arrow is a type of arrow that had barbs on the back end of the head. These caused tremendous pain as they would become lodged in a body part and had to be pushed rather than pulled.

Historical/mythical reference: Sestus was a Greco-Thracian town near the Hellespont (modern Gallipoli). In Greek mythology, the priestess Hero lived in a tower at Sestus, where she would light a lamp each night to guide her lover Leander's way to her.

Effect: Archer units have +2 Line of Sight and range. Also affects Throwing Axemen in Tale of the Dragon. Quite useful for archer units.

Literature reference: The Trojan Walls and Gates were unbreachable if the events of Homer's Illiad, and related stories to the Trojan War are any indication due to the length of the war.

Tusk of the Iron Boar[]

Effect: Cavalry units and Chariot Archers have 10% more hit points. Helpful to any player who uses these units.

Reference: As with the Eye of Ornlu, this is a reference to Age of Empires II. The Iron Boar was a creature that Attila the Hun hunted in the first level of his campaign.

Mythical reference: The eye is personified in the goddess Wadjet. 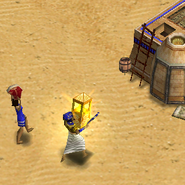 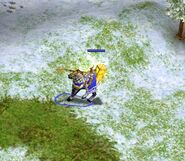 A Contarius (Hero) carrying a Relic

Relics garrisoned in a Temple. Hovering the cursor over one of the Relic icons (lower center right of the screen) will show the Relic name as well as its benefits.
Community content is available under CC-BY-SA unless otherwise noted.
Advertisement