Relics are special objects in Age of Empires II, which can be picked up by Monks and stored in Monasteries to generate gold for the player that holds them.

Relics are depicted in-game as medium-sized, white, trophy-looking constructs. At the beginning of a random map game, Relics usually are scattered around the map. Relics can only be carried by Monks. When one is placed in a Monastery, the Relic slowly generates gold at a rate of 1 every 2 seconds. This is equal to one fully upgraded Imperial Age Gold Miner that does not have to travel more than one tile. If more Relics are collected, more gold is generated. Relics are much more important in 1v1 games since trade is not a viable option of getting gold.

If the player trains a Monk for the sole purpose of collecting a Relic, the cost will pay for itself very soon, 200 seconds (3 minutes and 20 seconds) after the Relic has been garrisoned in a Monastery.

Collecting all of the available Relics on a map in a standard game will additionally initiate a 200-year timer that counts down to the victory of the player holding them, or their team if "Allied Victory" was checked before the game started. Relics captured by the player's allies will contribute to the team's victory so long as every single Relic on the map is in possession of a team member. Note that if victory method 'Conquest' is chosen, Relics will not win the game and all enemies have to be conquered.

In a standard game, 5 Relics are generated in random locations on the map. Relics cannot be targeted by attacks and are impervious to damage/destruction, but custom scenarios can make them disappear using a Remove Object trigger effect.

Without expansion pack data, a standard game always has five Relics scattered randomly across the map, while with The Forgotten or The African Kingdoms loaded the amount of Relics scales according to the chosen map size, with Ludicrous-sized maps containing as many as ten and tiny maps having three.

The following civilizations can research technologies or have bonuses related to Relics:

Relics are very important to any long-duration games, particularly on maps with scarce gold. Thus, it is very important to attempt to gather many as soon as the Castle Age is reached. During the Dark and Feudal Ages, using scouts to pinpoint Relic locations and building a few archers and infantry to deter enemy Monks from snatching free Relics can be useful. Monks are completely vulnerable while collecting Relics, so it is important attach a patrol with them to make sure they don't get killed. Researching Fervor and Sanctity is useful in order to make Monks retrieve Relics successfully by improving their speed and health, respectively.

In the late game, Relics can be an pivotal point in deciding where battles are fought. The successful theft of a Relic is generally a very large victory considering both the usefulness and versatility of extra gold. Relics should be closely guarded and contained within Monasteries that are difficult to reach and easy to defend. Optimally, they should also be scattered across several Monasteries to avoid losing all of them should the Monastery that contained them fall.

Introduced in Age of Empires II: The Forgotten, this game mode has similarities to King of the Hill. At the start of the game, there is only one Relic in the center of the map. All the players start with an indestructible Monastery and cannot build any Monasteries. The player that manages to place the Relic inside their Monastery instantly wins the game. Capture the Relic games are usually very short.

Relics on Holy Line, a special map introduced in Rise of the Rajas.

A Monk carrying a Relic.

A Monastery with garrison (usually one or more Relics), indicated by the flags.

A Relic as shown in a William Wallace cutscene. 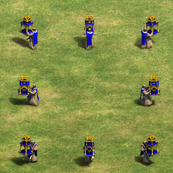 All views of a Monk holding a Relic in the Definitive Edition.

A Relic sitting on grassy terrain in Age of Empires II: Definitive Edition. 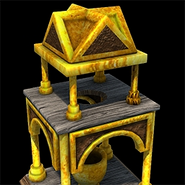