Age of Empires Series Wiki
Register
Don't have an account?
Sign In
Advertisement
in: Age of Mythology, Norse heroes, Myth units,
and 3 more

Myth Units (7)
Set Animals (3)
Reginleif is a hero Valkyrie in the Fall of the Trident campaign and the Close to Home scenario in Age of Mythology. 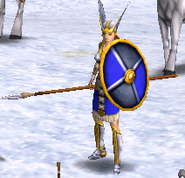