Revives fallen Peasants
Recreation is a Chinese Archaic Age god power in Age of Mythology: Tale of the Dragon that is available to worshipers of Nü Wa. When cast, it allows the player to revive up to four fallen Peasants.

Recreation allows the player to quickly recover from raids or attacks from aggressive animals. It is especially useful in the early game due to the importance of individual Peasants in resource acquisition, but its use in the late-game is limited. The Peasants must have been dead for two minutes or less. After that, they cannot be recreated. It is best used after the enemy raiders have either been killed or moved on as simply reviving the Peasant after their death would put them at risk of being attacked again right away. Recreation must be cast within the player's Line of Sight so they should always have a fast unit, such as a Scout Cavalry, ready to seek out the fallen Peasants. 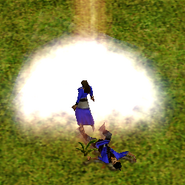 Peasant having just been revived
Add a photo to this gallery
Retrieved from "https://ageofempires.fandom.com/wiki/Recreation?oldid=276610"
Community content is available under CC-BY-SA unless otherwise noted.