The Rattan Archer is the first unique unit of the Vietnamese in Age of Empires II HD: Rise of the Rajas. It is an archer with very high pierce armor.

The Rattan Archer has great pierce armor, which is comparable to the Huskarl's and Ghulams. They can reliably stave off enemy ranged units, despite lacking attack bonuses against them; even Skirmishers and Genitours may struggle killing them. They can also resist Scorpion bolts and base defense arrows.

They also boast good attack for an archer, as well as decent speed; the second highest among foot archers, second only to the Plumed Archer. That allows them to pursue retreating archer units, as well as helping themselves retreat from massed Skirmishers and siege weapons. They can also take advantage of their speed to raid in search of Villagers, also helped by their armor, allowing them to survive tower and Town Center arrows.

However, they are vulnerable to any unit that can strike their weaknesses, particularly their lack of melee armor. Huskarls, fast infantry (especially Eagle Warriors), and of course, cavalry, can also tear them to shreds. They are also fairly costly in terms of wood for a foot archer unit, thus its cost may put a dent in construction of buildings, ships, and siege weapons. They are at their best when escorted by Battle Elephants and infantry units that can soak damage and strike against melee units, respectively.

It should be noted that unlike Crossbowmen during the Castle Age, Rattan Archers with Bodkin Arrow actually do 2 damage per shot against Mangonels, while their faster speed makes it much easier to dodge the latter's projectiles. This means that with good micromanagement, Rattan Archers have a good chance of destroying the go-to hard counter against early massed archers. Conversely, when facing Rattan Archers players should be wary of deploying lone Mangonels which may be picked off. Multiple Onagers during the Imperial Age will still make short work of massed Rattan Archers and serve as an effective counter.

As Rattan Archers are unique to the Vietnamese, only technologies that are available to them are shown in the following table: 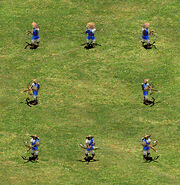 A group of Rattan Archers

Rattan Archers excel against other archer units, including mounted archers

Rattan Archer in the HD Edition and Definitive Edition
Español
Community content is available under CC-BY-SA unless otherwise noted.
Advertisement