6
Qutlugh is a cavalry hero in Age of Empires II: Definitive Edition - Dynasties of India. She has a unique appearance which has similarities with the model of Subotai. As a hero, she cannot be converted and can regenerate health.

She appears in the scenarios Pearl of the East and The Last Timurids in the campaign about her son Babur.

Qutlugh Nigar Khanum (also spelled Kutlak Nigar Khanum; died 1505) was the first wife and chief consort of Umar Shaikh Mirza II, the ruler of Ferghana Valley. She was a princess of Moghulistan by birth and was a daughter of Yunus Khan, the Great Khan of Moghulistan.

She was also the mother of Emperor Babur, the founder of the Mughal Empire of India. It is through her that Babur was a descendant of Genghis Khan, the founder of the Mongol Empire. Qutugh was known to often accompany her son in his many guerilla raids, or when he lacked a throne, as outcasts together.

She died shortly after Babur conquered Kabul, not living long enough to see her son found the Mughal dynasty and empire of India. 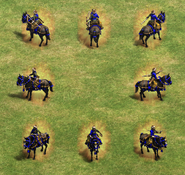 Many views of Qutlugh