Isabella serves as the AI personality of the Spanish in Age of Empires III. She is flirtatious and pouty when she interacts with the player, even if she is winning or losing very badly. Light-hearted as she is the Spanish are quite dangerous on higher difficulties and her playful tones can quickly aggravate someone who is losing to her AI. She is voiced by April Stewart.

Isabella I (22 April 1451 – 26 November 1504) was Queen of Castile and León. She and her husband Ferdinand II of Aragon brought stability to both kingdoms that became the basis for the unification of Spain. In reality, Isabella was of a very fair complexion, had blue eyes, and had a hair color that was between reddish-blonde and auburn.

In a Supremacy game, Isabella is among the weakest of the AI personalities. While she is generally the first AI to reach the Colonial Age, she advances to the next Ages more slowly than the others. She also tends to be highly reliant on shipments for military units, at least earlier in the game, and will almost never create a large army. Therefore it is not uncommon for Isabella to be defeated quite easily. If she does happen to be left alone, her armies will usually consist of Hussars, Artillery, and Pikemen supported by Lancers, Rodeleros, and/or Mercenaries (if applicable). Isabella tends to fare better on water maps, as she always tries to maintain a strong navy.

In a Post-Imperial Deathmatch game, Isabella is stronger and will send out large groups of units to harass enemies. She will use Tercios, Espadas, and Garrochistas in addition to some Musketeers, Skirmishers and Field Guns supporting them.

In both types of games, Isabella's defence is quite weak as she does not build Outposts; in early levels, she will have Outposts built from the Outpost Wagons. The Fort is the only concern if she decides to build it near her colony. 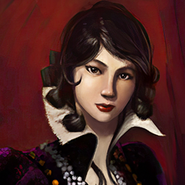