Rosalind Ayres
Queen Elizabeth (1533 - 1603) is the AI personality of the British in Age of Empires III. She was the fifth and last monarch of the Tudor Dynasty from 1558 to 1603 and is voiced in-game by Rosalind Ayres.

Elizabeth is a confident and bold leader. She usually addresses the player in a formal tone, even as enemies. She also displays a passive aggressive personality, often making taunts when she or the player achieve a certain goal.

Queen Elizabeth is solid though unspectacular. Her armies are comprised of mainly Longbowmen, Minor civilization units, and Mercenaries (if applicable) with smaller numbers of Musketeers and Falconets. Longbowmen are always kept at Veteran level, as she never includes the Yeomen card in her deck, which allows them to advance into Guard and Imperial status. She may occasionally use groups of Life Guards (Royal Guard Hussars) and Redcoats (Royal Guard Musketeers), though the latter is significantly more uncommon. Due to the extra Settlers provided by Manor Houses, she advances to the Imperial Age faster than other AIs. However she rarely upgrades her main army of Musketeers and/ or Longbowmen even to the Veteran level. However, she upgrades her Artillery to the Imperial level, given the chance. Elizabeth tends to be somewhat more powerful on water maps, as she likes building ships.

Elizabeth is fond of Native alliances, and will almost always include upgraded natives in her army. If The WarChiefs is installed, she will also train units from the Saloon in large numbers, as well as Spies from the Church. 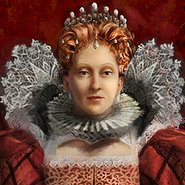