6
The Queen is a hero in Age of Empires II: The Forgotten. She is based on a generic queen, the female head of a monarchy.

She performs the same functions as her male counterpart, the King, and as such has no attack, but a fast movement speed (though slower than the King) and decent Line of Sight. As a hero, she cannot be converted and can regenerate health. She is available in the Scenario Editor only. 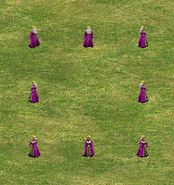 The Queen in the Scenario Editor
Add a photo to this gallery
Retrieved from "https://ageofempires.fandom.com/wiki/Queen?oldid=264700"
Community content is available under CC-BY-SA unless otherwise noted.