Age of Empires Series Wiki
Register
Don't have an account?
Sign In
Advertisement
in: Age of Empires III, Commerce Age, Infantry,
and 2 more

The Quechua Huaminca (Incan Huaminca before update update 47581) is a heavy infantry native warrior in Age of Empires III that can be trained at a Trading Post built on a Quechua settlement.

A similar unit, the Plumed Spearman, is available to the playable Incas in the Definitive Edition.

Huamincas are similar to Pikemen and Holcan Spearmen, serving as anti-Shock Infantry and anti-cavalry infantry with considerable siege damage. However, it has higher melee damage, more resistance, and slightly slower siege rate of fire (4 vs 3 for most) in comparison; Their siege rate of fire is standardized to 3 in the Definitive Edition.

As with most infantry, they are weak against artillery. 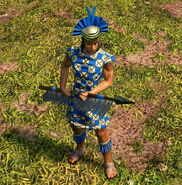 An in-game Quechua Huaminca in the Definitive Edition