4.0 (as Gatling Gun and Horse Artillery)
6.0 (as Culverin, Mortar, and Heavy Cannon)

Cannot switch to Limber Mode
Appear as a Culverin when trained

The Quaker Gun is a decoy unit in Age of Empires III: Definitive Edition that is unique to the United States and can be trained at the Artillery Foundry once the Industrial Age is reached and the "Marion's Diversions" Federal Home City Card (given by advancing to the Industrial Age with South Carolina) is sent. It is a harmless artillery unit which can appear as an artillery unit available to the United States for enemies to deceive or trick them.

As Quaker Guns' attacks deal no damage, attentive players can exploit that to distinguish Quaker Guns from other artillery, especially if they are mixed together. In addition, Quaker Guns are always in Bombard Mode and cannot switch to Limber Mode, which could be a dead giveaway.

The following are the artillery units whose appearance can be assumed by Quaker Guns:

When trained, Quaker Guns appear to enemies as a Culverin.

The Quaker Gun is automatically upgraded at every Age up starting in the Industrial Age.

The TEAM Artillery Hitpoints card is available to Ottomans and Portuguese (from the Fortress Age).

Named after the pacifistic Quaker movement, "quaker guns" were false cannons, usually made from logs painted black, that were used to deceive enemy spies or troops into believing a fort or emplacement had more artillery than they actually did. Quaker guns were used throughout the 18th and 19th centuries; one of the first recorded instances came in the American Revolution, when Colonel George Washington had surrounded a group of British Loyalists in a farmhouse and barn near Camden, South Carolina. Washington had a pine log prepared to resemble a cannon, pointed it at the Loyalist position, and threatened to open fire if they didn't surrender. The Loyalists gave up without a fight. 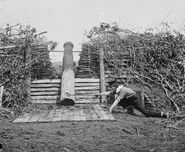 A Quaker Gun in use during the American Civil War
Community content is available under CC-BY-SA unless otherwise noted.
Advertisement