20 feet
The Qilin is a Classical Age Chinese myth unit in Age of Mythology: Tale of the Dragon. It is available to worshipers of Chang'e.

Upon its death, Qilin blood heals exactly 50 HP to all friendly units within range.

The Qilin is immune to the following God Powers and Myth Unit special abilities:

The Qilin's primary purpose is that of a meat shield. It is available through the worship of Chang'e who focuses on improving archers. Aside from the Scout Cavalry, the Chinese have no Classical Age Cavalry to attack enemies head on while archers act as support. The Qilin can fill that niche thanks to its high armor and high HP for a Classical Age Myth Unit. It is able to deal decent damage while taking the bulk of enemy attacks while being supported by Archers. Even if it is killed, Qilin blood heals allied units, enabling them to survive longer in battle.

Alternatively, the free Qilin summoned at the Temple upon advancing to the Classical Age can also act as a scout. It has high speed and greater line of sight than the Scout Cavalry, enabling it to uncover more areas on the map. Since it is immune to several God Powers, it cannot be killed as easily or be taken advantage of. Due to their rather high population cost, players should create Qilins in moderation.

Believed to be a good omen, Qilin is a mythical creature from the far east resembling a hooved dragon with antlers and sometimes fire, which covers parts of its body. Despite its formidable appearance, Qilin was considered a peaceful creature. It would appear to wise rulers and bestow luck and prosperity, and it would only reveal its ferocious side if a pure cause was threatened. Various depictions and stories include Qilin gliding on clouds so as to harm not a single blade of grass or a living creature. 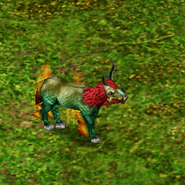 Qilin dying
Add a photo to this gallery

Wikipedia has an article about:
Qilin
Retrieved from "https://ageofempires.fandom.com/wiki/Qilin?oldid=262233"
Community content is available under CC-BY-SA unless otherwise noted.