The Puma Spearman is a melee heavy infantry in Age of Empires III: The WarChiefs that is unique to the Aztecs and can be trained at the War Hut once the Commerce Age is reached.

Armed with a spear, the Puma Spearman is effective against cavalry and buildings. It is the Aztec version of the European Pikeman, stronger in combat (50% more attack, 12,5% more hit points and double melee resistance) but slightly more expensive and costing food and coin rather than food and wood. Pikemen cannot be upgraded beyond Veteran level and are replaced by Halberdiers in later Ages. Puma Spearmen, on the other hand, have access to Elite, Champion, and Legendary upgrades. Even though they have less health than a Halberdier they have a greater multiplier against cavalry. The "Temple of Xochipilli Support" Home City Card (increases speed to 6) make them even more dangerous because it allows them to better defend Otontin Slingers from flanking cavalry or defend villagers from raiding.

As Puma Spearmen are unique to the Aztecs, only technologies that they have access to are shown in the following table:

As Puma Spearmen are unique to the Aztecs, only their cards and other civilizations' TEAM cards are shown in the following tables: 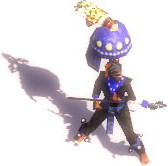 The Puma Spearman from the in-game history section

Model of the Puma Spearman

Model of the Elite Puma Spearman