The Pronghorn is a huntable animal in Age of Empires III. It is a North American antelope, living in the maps Texas, Painted Desert, Great Plains, Rockies and Sonora. It lives in large herds of around 10 animals, has 20 HP, and holds 400 food.

What distinguishes the Pronghorn over other similar huntables, is its speed; 3.0 when walking, and over 5.0 when running away from Villagers' gunfire. Hunting them can result in Pronghorn herds scattering around quickly when shot.

A pronghorn in real life is native only to Colorado, and spread into the plain areas in very few numbers. It favors desert areas.

The pronghorn is sometimes called an antelope, but is not an actual antelope, though closely related. Pronghorns are small and lean and are fast runners - the fastest North American mammal, with top speeds of 60 mph. They have light brown coats, white bellies, white throat stripes, and a white patch on their rumps that they use to signal danger to the others in their small herds. The horns that give them their name have a bony core surrounded by a hairlike sheath that is shed annually.

Their chief predators are wolves, coyotes, and humans. Their calves are sometimes carried off by golden eagles." 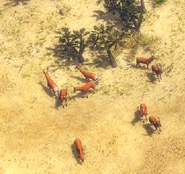 A herd of pronghorn in Sonora
Add a photo to this gallery
Retrieved from "https://ageofempires.fandom.com/wiki/Pronghorn?oldid=226424"
Community content is available under CC-BY-SA unless otherwise noted.