Age of Empires Series Wiki
Register
Don't have an account?
Sign In
Advertisement
in: Age of Mythology, Atlantean units, Myth units,
and 7 more

Heart of the Titans

Prometheus is an Atlantean Classical Age minor god in Age of Mythology: The Titans. He is available to worshippers of Kronos and Oranos.

Prometheus is a minor god who helps the player to create more heroes, and is therefore a good choice of minor god for players whose enemies are focusing on myth units. His Heart of the Titans technology reduces the amount of food, wood and gold needed to transform units into heroes by 20%. Furthermore, his God Power, Valor, turns a small number of human units into Heroes instantly. Creating heroes is expensive, and these two benefits greatly reduce the amount of resources needed. Prometheus' Myth Unit is the Promethean, a man made of clay that is cheap, has a fair crush attack, and divides in two when killed.

The son of the Titan Lapetus, Prometheus was born a mortal. He shaped humankind out of water and clay (and Athena breathed life into the form). After siding with Zeus against the Titans, he tricked the king of the gods into taking animal bones as sacrifices, leaving the good meat for humans. In spite, Zeus removed fire from the world, bringing great suffering to all. To relieve the people he had created, Prometheus stole fire from the Sun and gave it back to the world. In retaliation, a furious Zeus sentenced Prometheus to be chained to a rock for 30,000 years, while an eagle daily tore out his liver (which grew back each night). By giving warning to Zeus of a prophecy of his downfall, he won a reprieve and was allowed to trade his mortality to Chiron (doomed to an eternity of agony) and thereafter joined the immortals on Olympus.

4 Projectiles
In The New Atlantis Campaign, Prometheus appears as a Titan unit and is a secondary antagonist. He escapes Tartarus after Kastor inadvertently weakens the Olympian gods. Prometheus proceeds to wreak havoc across the city of Sikyos and would have killed Kastor as well if Ajax and Amanra hadn't intervened. After defeating a couple of lesser Titans, Kastor returns and weakens Prometheus by rebuilding settlements which causes Gaia's lush to spread out. This lowers his hitpoints and removes his regeneration ability allowing him to be killed.

Excluding Osiris, Prometheus is the strongest unit in the single-player campaign and in the whole game. He has 50,000 hitpoints and regenerates 500 HP/second, making it nearly impossible to severely damage him. 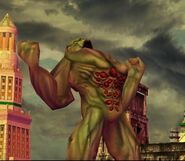 Prometheus destroying the city of Sikyos.

Wikipedia has an article about:
Prometheus
Community content is available under CC-BY-SA unless otherwise noted.
Advertisement