The Privateer is a mercenary naval vessel in Age of Empires III. It is the strongest naval unit in the game, and in the base game, the strongest ship available in the Colonial Age.

Privateers would only lose to the Frigate in a one on one fight. With the release of the The WarChiefs, the Spanish Galleon bested the privateer as the strongest early age ship, putting the privateer in second place, but only in terms of durability in a one to one fight. A single Galleon cannot defeat two privateers simultaneously unless it attacks while the ships are distracted (for instance by Treasure Guardians), and the cost of a galleon exceeds the shipping cost of two privateers by 300 wood. The acquisition of a second galleon would require the 1 Galleon Home City Card in conjunction with the original damage and hit point booster card. For those reasons the privateers are usually the best option for naval shipments in the Colonial Age, unless specifically using a strategy involving Caravel, Fune, Galley and War Junk fishing or the Galleon and Fluyt ability to train troops without the need of a barracks or the ability to resist building fire.

The only limiting factor to using Privateers are the number that can be shipped. They have no build limit, and as such the Dutch can use them endlessly beginning in the Industrial Age as long as any enemy does not use Blockade. For this reason they are exceptional at bolstering any naval force that has access to them.

Broadside Attack: Fires a volley of cannon shots at an enemy ship from a range of 30, with each shot causing 150 siege damage. 60 seconds cooldown.

The Privateer speaks Berber, which they shares with Barbary Corsair and Pirate.

"Nations sometimes recruited privateers to supplement their navy. Privateers were privately owned ships that had government sanction - issued as a letter of marque - to attack enemy's ships, both military and civilian. Without the permission granted by the letter of marque, these attacks were considered acts of piracy. It was difficult to control privateers once they were at sea, and often they would act outside the scope of their agreements. These abuses led to the abandonment of privateers in the middle of the nineteenth century.

Captain William Kidd was a famous privateer turned pirate. He was initially commissioned to hunt down Blackbeard, but he eventually went astray and became a pirate himself. Kidd was hanged in London in 1699." 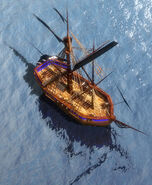 An in game Privateer.

A Privateer being attacked by three Galleons
Add a photo to this gallery
Retrieved from "https://ageofempires.fandom.com/wiki/Privateer?oldid=259861"
Community content is available under CC-BY-SA unless otherwise noted.