Prithviraj is a campaign in Age of Empires II HD: The Forgotten which is depicting its namesake, Prithviraj Chauhan (c. 1166–1192), who was the ruler of Ajmer and Delhi (in India) from around 1178 until his death in 1192.

+10 vs Standard building
+6 vs Spearman

6
Prithviraj is a cavalry archer hero. As a hero, he cannot be converted and can regenerate health. He is also available in the Scenario Editor.

Throughout the course of the campaign, Prithviraj appears in three forms overall:

Most of the time throughout the campaign, he appears in his Heavy Cavalry Archer form.

In The Forgotten, the Prithviraj campaign consists of four scenarios. The player plays as the Indians, and the player color is orange.

In the Definitive Edition, the campaign is substantially altered. The player color is now blue, and there are five scenarios.

With the release of Dynasties of India in 2022, the campaign was once again altered, with the new Gurjaras civilization becoming the player civilization. Various changes were also made to individual scenarios. The unit now uses foot army voice lines instead of mounted unit ones.

The campaign is narrated by Chand Bardai, a court poet of the Chauhan Dynasty and the author of the Prithviraj Raso. 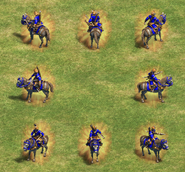 Prithviraj in the Definitive Edition 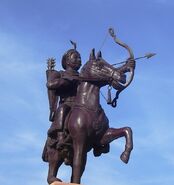 Statue of Prithviraj Chauhan at Ajmer

The Prithviraj campaign map in the The Forgotten
Español
Community content is available under CC-BY-SA unless otherwise noted.
Advertisement