Prince Henry the Navigator (1394 － 1460) in serves as the Portuguese AI personality in Age of Empires III. He is the default leader of the Portuguese if played against the computer. He is voiced by Francisco Lorite.

Henry the Navigator is fairly confident as a leader. He makes a lot of comments about exploration. If he is an enemy, he will often taunt the player with snide or sarcastic remarks.

Prince Henry generally creates armies at a much slower rate than other AIs, favoring his economy first. He will usually hold off on performing any raids during the Colonial Age, then attack with massed troupes of Halberdiers supported with artillery. If The WarChiefs expansion is installed, Henry will often provide a mix of Horse Artillery and Organ Guns with his Halberdier armies.

Without the expansion, Henry's armies will usually consist of Halberdiers, Hussars, and Culverins. Musketeers or Cassadors are relatively uncommon in his army setups.

Prince Henry will try to focus all of his resources on quickly expanding his economy. He will quickly advance towards the Industrial Age and does not train many troops as a result of heavy economy focusing. This makes him easily susceptible to attacks during the Colonial and Fortress Ages and is usually the time when he is defeated by other AIs on higher difficulties.

However, should Henry be left alone by the AIs during those two Ages, he will become stronger during the Industrial and Imperial Ages due to the extra resources from his intense economic policies. His settlement can be easily razed if the player's army can beat his in battle. 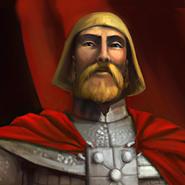 In-game avatar
Add a photo to this gallery
Retrieved from "https://ageofempires.fandom.com/wiki/Prince_Henry_the_Navigator?oldid=324679"
Community content is available under CC-BY-SA unless otherwise noted.