Heals injured units (10 hit points per second, range 12) if they are not moving around the map

Priests are Healer units in Age of Empires III that can be trained at the Church. They can heal all allied units of their own, except ships which repair themselves while docked.

Unlike in previous games, Priests do not convert enemy units. If told to interact with them, they will attack (rather pitifully) with their fists, since they don't carry weapons.

Several civilizations have their own unique equivalent to the Priest, including the Ottomans (Imam), Spanish (Missionary), Aztecs (Warrior Priest), Iroquois and Sioux (Medicine Man), and Incas (Priestess). Asian civilizations do not have a Priest equivalent but their Monks can heal friendly units (Chinese require the Temple of Heaven wonder, Japanese require Reiki).

Although a rare sight in multiplayer games, priests have a niche strategy involving the Russian Cheap Priests Home City card. This card allows training a little mass of priests who will act as effective meat shields, since there aren't any units with multipliers against them. Enemy soldiers will be distracted and shoot at them, giving the Russian player and his allies a tactical advantage.

Different in-game variants of Priest: The one on the left is common for the British, Dutch and French and the one on the right is exclusive to the Portuguese 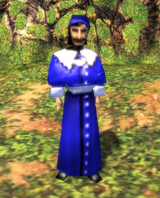 Retrieved from "https://ageofempires.fandom.com/wiki/Priest_(Age_of_Empires_III)?oldid=306416"
Community content is available under CC-BY-SA unless otherwise noted.