11
The Priest is a variant of the Monk introduced in Age of Empires II HD: The African Kingdoms. It is one of several returning units from the first game re-introduced in Age of Empires II, such as the Heavy Swordsman and Legionary. Priests cannot be trained, but are available in the Scenario Editor and make appearance in some campaign scenarios, e.g. Estado da India and Echoes of Heroes. 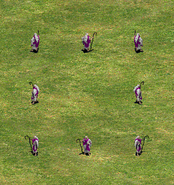 A group of Priests
Add a photo to this gallery

Retrieved from "https://ageofempires.fandom.com/wiki/Priest_(Age_of_Empires_II)?oldid=313375"
Community content is available under CC-BY-SA unless otherwise noted.