12
The Priest is a special unit in Age of Empires that can be trained at the Temple. Slow-moving, fragile, and unable to attack, Priests can instead heal wounded friendly units (except for ships) nearby and attempt to convert enemy units. After a successful conversion, the enemy unit will switch colors to the team of the Priest and be under control of that player. After a conversion, a Priest may not again attempt to convert until his rejuvenation meter has regained back to its fullest, at 100%.

Priests are available to all civilizations except for the Macedonians.

The acceptance of gods and goddesses associated with complex religions required the provision of priests (and priestesses) who acted as representatives of the gods among the people. Priests developed and conducted rituals, interpreted the demands of gods, taught and enforced the religious laws, and sought new believers. Particularly effective priests, or those representing a potent religion, were thought capable of healing. 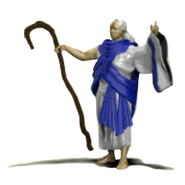 A render of the Priest model

The Priest is already available in the Stone Age. However, the Temple will not be available until the Bronze Age.