Alive (as of Company Confrontation)

Ismail Bashey
Pravar Patel is the deuteragonist of the Act III: India campaign in Age of Empires III: The Asian Dynasties. He is an ally of Nanib Sahir and dons a dusty turban and Sepoy uniform that is stained with blood.

Pravar Patel was a sepoy soldier under the British East India Company until, dissatisfied with the British rule in India, joined the Indian resistance. He recognizes Nanib as general in charge of the rebels.

Pravar fights with a powerful rifle from a long range. He can use Eye of the Assassin which is similar to Crackshot Attack used by Explorers, but does less damage and has shorter cooldown.

Like other heroes, Pravar has many hit points (although lower than typical heroes), but if he falls, he will collapse instead of dying and need to regenerate enough hit points to be rescued by allies. Similar to Explorers, he can collect treasures, but cannot build Trading Posts and Town Centers. 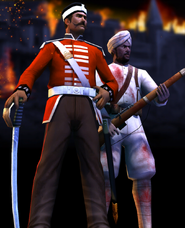