The Porcelain Tower is a wonder in Age of Empires III: The Asian Dynasties that is unique to the Chinese and can be built to advance into the next Age. It generates resources per second which can be set to food, wood, coin, or a combination of all resources (including export and experience).

As the Porcelain Tower is unique to the Chinese, only technologies that they have access to are shown in the following table:

As the Porcelain Tower is unique to the Chinese, only their cards and other civilizations' TEAM cards are shown in the following tables:

"Located on the south bank of the Yangtze River in Nanjing, China, the Porcelain Tower was once considered one of the Seven Wonders of the World. The people of China called it Bao'ensi, or the "Temple of Gratitude,” but visiting Europeans called it the Porcelain Tower of Nanjing in reference to the tower's porcelain bricks.Rising from an octagonal base were nine stories that reached a final height of 260 feet. Although that height was impressive, what made the tower unforgettable were the brilliant white bricks that faced the tower. These bricks glittered in the sun by day and were illuminated by as many as 140 lamps by night. Colorful stoneware tiles with green, yellow, white, and brown glazes were worked into the porcelain panels to form the images of animals, landscapes, flowers, and bamboo.

The Porcelain Tower and other great temples were destroyed in the year 1900 by an invading Anglo-French force known as the Eight-Power Allied Forces. The tower is currently under reconstruction."
—In-game history section 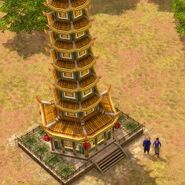 The Porcelain Tower as it appears in-game 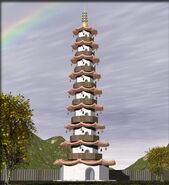 A realistic reconstruction of the Porcelain Tower
Add a photo to this gallery
Retrieved from "https://ageofempires.fandom.com/wiki/Porcelain_Tower?oldid=258617"
Community content is available under CC-BY-SA unless otherwise noted.