The Plumed Archer is the unique unit of the Mayans in Age of Empires II: The Conquerors. It is a fast, well armored foot archer. Its comparatively high base cost is reduced by the Mayans' civilization bonus, making it one of the most cost-effective archers.

Plumed Archers have a lower attack than most archers, but have much higher HP and a higher movement speed, enough to even keep up with some cavalry. This allows them to perform hit-and-run tactics and effectively replace the Cavalry Archer for the Mayan civilization. Plumed Archers have an attack bonus against infantry, making them effective against most infantry units in the game, with the exception of Huskarls and Samurai. However, they are vulnerable to cavalry, though their increased hit points allow them to last longer than most archers, and in groups, weaker cavalry such as Hussars can be killed quickly enough to negate the threat. Paladins, however, are a much bigger threat due to having enough attack to still kill even Plumed Archers quickly, and having 3 pierce armor, allowing them to just take 2 damage per arrow from Elite Plumed Archers, which means they usually can take 90 hits before dying.

They must be paired with the Eagle Warriors in most situations, as both units move fast enough to perform raiding tactics, both have good HP, and cover the main weaknesses of the other unit. Like with other archers, they are vulnerable to siege weapons, especially Onagers, although to a lesser extent since their 65 HP allows them to take two Onager shots (Siege Onagers still kill them with one payload however), and their speed makes dodging enemy siege attacks significantly easier. Rattan Archers can defeat Plumed Archers with ease, even though the Plumed Archers have decent pierce armor themselves. Elite Skirmishers and Genitours are also cost-effective against Plumed Archers, and are ideal units to spam against them.

As Plumed Archers are unique to the Mayans, only technologies that are available to them are shown in the following table: 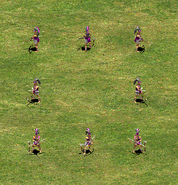 A group of Plumed Archers 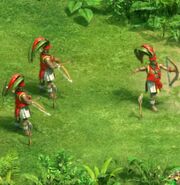 Plumed Archers in the Definitive Edition

A render of the Plumed Archer model

Plumed Archer in the HD Edition and Definitive Edition
Español
Community content is available under CC-BY-SA unless otherwise noted.
Advertisement