Age of Empires Series Wiki
Register
Don't have an account?
Sign In
Advertisement
in: Age of Mythology, Tale of the Dragon, Myth units,
and 2 more

16 feet
The Pixiu is a Chinese Heroic Age myth unit in Age of Mythology: Tale of the Dragon. It is available to the worshipers of Dabo Gong.

Pixus are best suited for attacking buildings as they deal both hack and crush damage. They also have high pierce armor so are resistant to tower and fortress-like building's attack. Their ability allows them to generate gold as long as they are actively attacking anything, not just when dealing damage. Since buildings cannot run away and Pixius have only average speed for a myth unit, they generate gold faster by attacking them.

They can be used as an alternative to Fire Lances to destroy buildings in the Heroic Age. As they have a melee attack, Pixius lack a minimum ranged attack and can better defend themselves against other melee units. However they still have low hack armor and attack speed so they will still require protection from melee units, especially other myth units and heroes.

Pixiu are a good choice for players who need to destroy enemy buildings while increasing their resource intake. After fighting for 2 minutes and 47 seconds, a Pixiu would have accumulated enough gold to pay for itself, saving the player resources that can be invested elsewhere.

Bearing a strong resemblance to a winged lion but with the head of a single-antlered dragon, Pixiu is a powerful mythical creature that wards off evil spirits and possesses an insatiable hunger for gold and silver. The last attribute led many to believe that the creature is able to attract wealth from all directions, and some literal depictions see the creature bring gold in its mouth.

Despite the association with fortune, Pixiu is also a very fierce creature with sharp fangs and a ferocious spirit in battle. 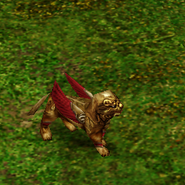 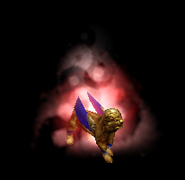