The Pistolero is an Outlaw unit armed with a pistol. As with other outlaws they cost little coin but many population slots, though their population cost can be lowered with the Theaters shipment. Compared to standard Musketeers, Pistoleros are faster and slightly more powerful.

Pistoleros are difficult to recommend beyond the Commerce Age, as standard Musketeers will eventually outdamage them with their upgrades. For Dutch, German, and Chinese players, who do not have a musket unit, Pistoleros are still a decent option, unless a better mercenary such as the Fusilier or Highlander is available.

3.0
The Bandit Gunslinger (Outlaw Pistolero before update 38254) is the Treasure Guardian version of the Pistolero.

Spanish and Portuguese can get 10 Bandit Gunslingers along with Bandit Riders through revolution by selecting Miguel Hidalgo. If one has a War Chief, one should not use it on him for fighting other treasure guardians, but use him as ranged cavalry. 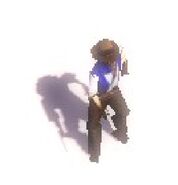