Pierce (12)
The Pirate Ship is an enemy unit regularly encountered in the Fall of the Trident campaign in Age of Mythology. It cannot be trained in normal games but can be found in the Scenario Editor. They come in two forms: Egyptian and Norse.

Pirate Ships function similarly to Longboats as they fire arrows and are mainly used to transport units. While they do not benefit from the Armory "weapons" upgrades, they are still more powerful than regular arrow ships as they have superior HP and Armor. It is advised to keep melee units away from the shore as they are highly vulnerable to the ships' ranged attacks.

The best way to take them out is with siege weapons or naval myth units (especially since the Heroic Fleet upgrade was not available in the original campaign). Another plausible way to beat them is with constructing fortifications close to shores, or Siege Ships, such as Juggernauts.

Although represented by Egyptians, and sometimes Greeks (and Norse to extent) the Pirates are most likely representations of the Sea Peoples (themselves of unknown origin), this could explain how they are so widespread in Fall of the Trident, this could also explain their absence since Fall of the Trident, since they would have been destroyed by the Egyptian Military and Navy under Ramses II.

The black sails' of these ships may also be a reference to the myth of Theseus, who after killing the Minotaur (incidentally, the symbol found on the black sails), and either leaving Ariadne behind in Crete (or having her abducted while sailing by Dionysus), depending on the writer/narrator, forgot to change the sails' color into white while returning to Athens. Aegeus, in grief, committed suicide upon viewing the black sails, and the sea where he fell was then known as the Aegean Sea. 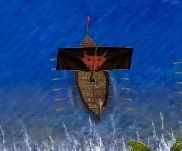 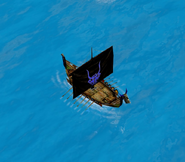 Norse version of the Pirate Ship

Black sail of the pirate ships
Add a photo to this gallery
Retrieved from "https://ageofempires.fandom.com/wiki/Pirate_Ship?oldid=304398"
Community content is available under CC-BY-SA unless otherwise noted.