x4.0 vs. Cavalry and Light infantry

The Pirate is an outlaw in Age of Empires III available in the Amazonia, Caribbean, Hispaniola, New England, Orinoco, Patagonia, and Saguenay maps.

The Spanish can train Pirates (as Buccaneers) from Galleons and the Saloon regardless of the map with the Spanish Gold Home City Card.

Pirates are an outlaw unit armed with a sword. While cheap in terms of coin, they require six population (four with the Dance Hall Home City Card). They are fast and have a high resistance to melee attacks, which, along with their 4x multipliers against cavalry and light infantry, makes them a cheap response to opposing cavalry.

Pirates are especially useful in the Colonial Age, when they outdamage both the standard Pikeman and the Qiang Pikeman. Indian players should never use the Pirate, as both Rajputs and melee-stance Sepoys can perform the same role while being both cheaper in terms of population, and more powerful in raw damage.

"A pirate in the New World."
—In-game description

In the Act I: Blood campaign, Pirates (as Buccaneers) can be trained from Lizzie's Flagship during The Fountain of Youth and Spanish Treasure Fleet scenarios. They are slightly more expensive and lack the heavy melee resistance of their outlaw counterparts, yet they have more hit points, speed, and use fewer population.

During the Spanish Treasure Fleet scenario, a lot of them can be trained very quickly due to the captured Spanish Galleons' coin production. They are an adequate replacement for the Inca that are freed in the beginning as they have better hitpoints. They are essentially fodder units used to keep the Spanish and Boneguard units from attacking more valuable targets such as the Scottish Highlanders, Falconets and Mortars.

The Treasure Guardian variant of the Pirate has unusually high hit points. It is recommended to tame these units due to the long time it takes for an Explorer, War Chief, or Monk to defeat it.

The Pirate speaks Berber, which they shares with the Barbary Corsair and Privateer.

"Pirates, or buccaneers, are sailors who prowl sea lanes, killing sailors, capturing ships, and looting cargo. The centuries following the Spanish plunder of the Aztec, Inca, and Maya was the golden age of piracy. Spanish galleons, wallowing low in the water from all the treasure taken onboard, were returning from the Carribean to Spain, where the gold would fund wars against the French, the Ottomans, and the Dutch. The treasure galleons were slow, fat targets, very well-defended and wholly irresistible to pirates. In 1628, five years after he had arrived in the West Indies, Piet Hien, a Dutch trader for the West India Company, could not resist taking on the treasure fleet. He managed to corner part of the fleet in the Bay of Matanzas and captured millions upon millions of guilders in gold, silver, and trade goods.

Some pirate bands were highly democratic, electing their captains and making important decisions by vote. Food, drink, and wealth were split between all crew members, with larger shares going to officers. Pirates disabled while crewing a ship were given a large lump sum as compensation. There were very harsh punishments for stealing from or striking crew members, and gambling was generally restricted."

In-game the five different appearances of the Pirate 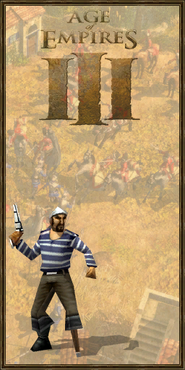 Pirate in the History menu.

Pirate Concept Art
Add a photo to this gallery
Retrieved from "https://ageofempires.fandom.com/wiki/Pirate_(Age_of_Empires_III)?oldid=259599"
Community content is available under CC-BY-SA unless otherwise noted.