5
The Pilgrim is an economic unit in Age of Empires III: The WarChiefs. It is similar to the Settler, but can only be found on the Plymouth map, along with a Turkey Scout.

At the beginning of the game, Pilgrims can be found seated around a table with food on it. They are dressed in black and white clothes, with the women with the same type of dress as a regular Settler and the men wearing tall hats.

Similarly to other gatherers, Pilgrims are meant to gather resources at early game, construct buildings and towards the late game, gather from Farms and Estates.

What sets them apart from the rest of the gatherers is their slightly improved hit points; they have improved survivability against early rushes, and are even capable of facing and beating early units, such as Pikemen and Crossbowmen.

Their extra HP also makes them more ideal for assisting heroes and Explorers at fighting Treasure Guardians, especially animal ones, who fight exclusively in melee.

Being similar to Settlers and Villagers, Pilgrims can be assigned with the following tasks: 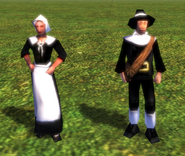