All except Turks and Gurjaras

The Pikeman is an infantry unit in Age of Empires II that can be trained at the Barracks once the Castle Age is reached. They are an excellent cavalry-counter. They are weak against anything outside the cavalry section, particularly archers, but make up for it by being one of the cheapest military units in the game. Additionally, no gold is required to train them, making them trash units.

Pikemen are available to all civilizations except for the Turks and the Gurjaras.

The Pikeman performs outstandingly against cavalry, doing 26 base damage to Knights and 51 to War Elephants. This is nearly a 50% increase in attack, which makes their upgrade from Spearmen extremely important to get.

Due to their frailty, however, they should always operate in groups. In addition to cavalry, they are decent at combating enemy Skirmishers (even though Skirmishers do bonus damage to them), because they can outspeed the Skirmishers and exploit their minimum range. Pikemen are useful when attacking players who are basing their army on cavalry units or when defending against cavalry raids. They make an excellent complement for siege weapons, as they can protect them against enemy melee cavalry. Though they might lack offensive power to defeat enemy units outside of the cavalry sector, they can serve as cannon fodder since they are as cheap as a military unit can be.

The Spearman line, with the Pikeman in the middle.

The Spearman line, with the Pikeman in the middle. In the Definitive Edition. 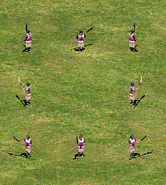 A group of Pikemen

An artwork of a real Pikeman

Render of the Pikeman's 3D model 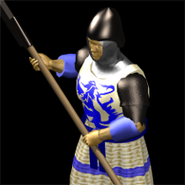 A render of the Pikeman model