Age of Empires Series Wiki
Register
Don't have an account?
Sign In
Advertisement
in: Age of Empires III, Foes, French,
and 2 more

Daniel Riordan
Pierre Beaumont is a French trapper and a foe of Amelia Black. He is featured in Age of Empires III as the main antagonist of the Act III: Steel campaign.

Beaumont is mentioned to have been a member of the New Orleans aristocracy at one point, but he left the city for the less luxurious life of a trapper, prospector, and hunter. A senior member of the Circle of Ossus, Beaumont uses his knowledge of the wilderness to the Circle's advantage.

During the Mexican–American War, Beaumont and a party of armed men were forced to flee northward to the shelter of an American fort. When the fort was besieged by the Mexicans he assisted its commander, Major Cooper, and entrepreneur Amelia Black in defending it. Discovering Amelia's status as a member of the Black family, the Circle's enemies, Beaumont devises a trap for her in an old mine. However, his attempts fail after Kanyenke, an old friend of John Black, saves her before Beaumont is able to spring his trap. Later on, Beaumont and the Circle head to the location of the Fountain of Youth to collect gold from a long sunken Spanish treasure fleet. Amelia and Cooper chase him out, but Beaumont manages to lure Cooper and kills him before Amelia and the others are able to arrive.

After the events in Florida, Beaumont leads an attack at a hidden Inca city to collect barrels of the fabled water that the Incans collected after Morgan Black destroyed the Fountain. However, Amelia had also arrived at the city, after being sent to Peru by the Seminoles and helping Simón Bolívar and his rebels gain independence from Spain. Amelia and the Incans stop the Circle assault, but Beaumont manages to steal several barrels of the fabled water during the chaos.

Beaumont later returned to the Circle's stronghold in Havana, where Amelia continued to pursue him. With the help of the Cubans and the U.S government, Amelia besieged the fortress. During the battle, Beaumont assists his men in defending the fortress when he is knocked off a battlement, feigning death. After Amelia comes to check if Beaumont is really dead, he rises back up and attempts to kill her, but is stopped by Kanyenke. Amelia then shoots Beaumont, killing him.

Beaumont fights with a knife that he can throw at range to do melee damage, similar to Haudenosaunee Tomahawks and the Throwing Axeman in Age of Empires II. He also has a whopping 75% resistance against melee attacks.

Like other heroes, Beaumont has many hit points, but if he falls, he will collapse instead of dying and need to regenerate enough hit points to be rescued by allies. He can collect treasures, but unlike Explorers, cannot build Trading Posts and Town Centers, and has no special abilities. 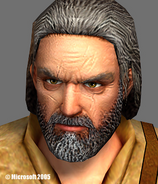