(Heal) 14 feet
The Physician is a Greek healer in Age of Mythology: Extended Edition, added in the v2.0 patch and the Tale of the Dragon expansion. The sole ability of the Physician is to heal units, which they do at 10 HP per second (33% faster than Egyptian Priests). The rate of healing is greatly lowered when the unit being healed is fighting.

Physicians are a welcome addition to Greek armies, especially for Poseidon players who have no other means of healing available. They also ensure a longer life for expensive, super-strong myth units, such as the Cyclops and Hydra.

"Bloodshed on the battlefield is inevitable and being able to restore the health of one's units can have a great impact on the outcome. Physicians are Greek healing units that can be used during or after a battle to heal both the humans and mythological creatures, and patch up their wounds."
—In-game description 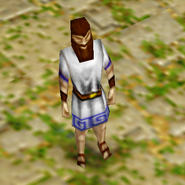 Player 2 Physician
Add a photo to this gallery
Retrieved from "https://ageofempires.fandom.com/wiki/Physician?oldid=265995"
Community content is available under CC-BY-SA unless otherwise noted.