1,800 food,
700 gold
The Phalanx is a heavy infantry unit in Age of Empires that can be trained at the Academy. It is the successor for the Hoplite in cases of most civilizations, and may be upgraded to the Centurion. The Phalanx, however, is unfortunately slow, but makes up for it with attack strength, high hit points, and high armor.

The Phalanx is only available to the following civilizations:

"The phalanx was a Greek heavy infantry formation used from about 800 BC to the conquest of Greece by the Romans in the Second Century BC. The Greek infantry, called hoplites, formed a square that could quickly face in any of four directions. Each man carried a pike or spear up to 12 feet in length. As the formation advanced, it presented an imposing wall of spear points to its front. Hoplites carried a large round shield and wore a bronze helmet, breastplate (cuirass), and greaves. All free men in the Greek city-states trained in the phalanx. The discipline and drill required to make the phalanx work permeated the entire Greek culture. Greek infantry fighting in the phalanx was the finest in the western world for several centuries. No other infantry faced it in hand-to-hand combat and won until the new tactics of combined arms made it obsolete. The last great success of the phalanx was in Alexander's campaign against the Persians, although in that army it fought as part of a combined arms army." 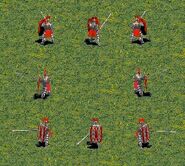 Phalanxes in the Scenario Editor 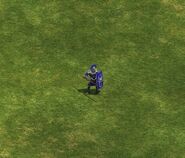 A Phalanx in the Definitive Edition
Add a photo to this gallery
Retrieved from "https://ageofempires.fandom.com/wiki/Phalanx?oldid=277192"
Community content is available under CC-BY-SA unless otherwise noted.