The Petard is an infantry siege unit in Age of Empires III: The WarChiefs that can be trained at the Artillery Foundry once the Fortress Age is reached. Similar to the Age of Empires II counterpart, it is a suicide unit that can deal massive damage to buildings.

Unction boosted regular Petards with all available upgrades are capable of inflicting 3257 damage versus buildings in a single explosion. They will also possess 393 hit points, 4.40 speed and double (12) their usual melee attack power. However their hand attacks are still ineffective in actual combat.

Russian Petards can cause up to 2800 damage with the "Ransack" Home City Card.

The Petard is automatically upgraded in the Industrial Age and Imperial Age. 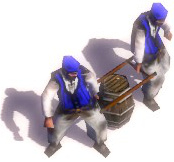