Age of Empires Series Wiki
Register
Don't have an account?
Sign In
Advertisement
in: Age of Empires II, Cheat units, Infantry,
and 3 more

+8 vs Standard building
+8 vs Stone defense

Penguins in the HD Edition have the same unit responses as human units, but are given realistic penguin noises in the Definitive Edition. 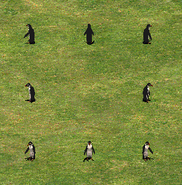 A parade of Penguins