Age of Empires Series Wiki
Register
Don't have an account?
Sign In
Advertisement
in: Myth units, Age of Mythology, Archaic Age,
and 3 more

18 feet
The Pegasus (Greek Πήγασος) is a Greek Archaic Age flying scout myth unit in Age of Mythology. It is trained at a Temple of any Greek major god for a minimal cost. The Pegasus can also spawn at any player's Temple for free if they have captured the Bridle of Pegasus Relic.

The following upgrades are only available to a Pegasus spawned from the Temple via the Bridle of Pegasus Relic.

Pegasi have no attack and are purely used for scouting. They have several advantages over the other Greek scout, the Kataskopos, first the Pegasus being a flying unit can only be attacked by ranged units (and buildings) and the second major advantage is the Pegasus can fly over forests, cliffs and water making it able to scout much more quickly and efficiently.

Pegasus was born from the severed neck of the slain gorgon Medusa. Bellerophon slew the mighty Chimera from the back of Pegasus after taming him with the help of Athena and the Golden Bridle. Pegasus later flew to Olympus when Zeus made him into a constellation. 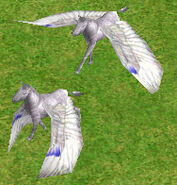 A pair of Pegasi

Pegasus can be sent to the enemy base for reconnaissance and potentially invoke devastating god powers, such as Earthquake.

Wikipedia has an article about:
Pegasus
Community content is available under CC-BY-SA unless otherwise noted.
Advertisement