The Papal Lancer is a melee heavy cavalry unit in Age of Empires III: Definitive Edition - Knights of the Mediterranean that is unique to the Italians.

The Papal Lancer is a melee cavalry similar to the Spanish Lancer, as being effective against all infantry units. It has twice the hit points of the Lancer, a slightly higher Line of Sight, and more attack, but takes three population spaces, moves slightly slower, and has half the multiplier against infantry.

Papal Lancers are trained at the Basilica in batches of three for 300 food, 300 wood, and 300 coin, which takes 60 seconds to train. However, these batches are queued as shipments, meaning that Home City Cards that have been sent before will arrive first, delaying Papal Lancers' training, but in exchange, players do not need to have available shipments to train them.

Despite not being as effective as Spanish Lancers in terms of attack, they can take a lot of damage due to their increased hit points and melee resistance. Unlike other Lancer-type units, they don't have negative multipliers against heavy infantry, which allows them to handle these units more easily. Additionally, Papal Lancers have the Deflection ability, which allows them to absorb some of the damage inflicted to nearby player or ally units, making them effective support units. However, they will be vulnerable against light cavalry (like Dragoons) and heavy infantry that can outnumber them easily, so it is recommended to combine Papal Lancers with ranged infantry units that counter light cavalry and heavy infantry.

The Papal Lancer is automatically upgraded in the Fortress Age, Industrial Age and Imperial Age, but its name is not changed to reflect this. 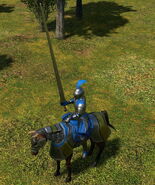