The Papal Bombard is an artillery unit in Age of Empires III: Definitive Edition - Knights of the Mediterranean that is unique to the Italians.

The Papal Bombard is the Italian replacement of the Heavy Cannon, and as such, it can only be obtained via shipments from the Home City or by slowly producing it in a Factory. Like Heavy Cannons, Papal Bombards are slow to move and deploy, but powerful and effective against all units and buildings. However, the Papal Bombard has the ability to absorb some damage incurred by other artillery units, a trait it shares with the Papal Guard.

Additionally, with the Papal Arsenal Home City Card, Papal Bombards gain a charged ability called "Holy Fire," which is a powerful incendiary area-of-effect attack that has a cooldown. 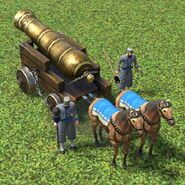