The Paladin is a heavy cavalry unit in Age of Empires II that can be trained at the Stable once the Imperial Age is reached. Like most other cavalry, Paladins are strong and agile. They are considered to be one of the strongest and most effective units in the game.

The * indicates that the civilization can fully upgrade their Paladins, i.e. gets Blast Furnace, Plate Barding Armor, Bloodlines, and Husbandry. Faith and Heresy are not taken into account because they only contribute to their combat strength in a very situational manner. Franks and Cumans do not have all technologies, but their bonuses cover and exceed the missing technology (i.e, Cumans only lack Husbandry, but have +15% speed that more than compensates).


The ^ indicates that the civilization has at least one civilization or team bonus or a unique technology that benefits the combat strength of the Paladin.
The ‡ indicates Paladins were previously available for this civilization.

Paladins are one of the strongest and, though not cheap, most effective units, and a full team of forty can easily destroy any ill-prepared town or army. In one-on-one combat, Paladins can slay Halberdiers, but lose in cost efficiency by a wide margin; and lose to Heavy Camel Riders in both population efficiency and cost efficiency.

Paladins are susceptible to enemy Monks because of their high gold cost and regular conversion resistance. Siege weapons are ineffective against Paladins in most situations, but if cautiously used, Onagers can deal a great amount of damage. However, if used against ordinary infantry, archers, siege units, and unsuspecting towns, Paladins dominate the field. Still, Paladins should always be used with caution as flaws in the implementation of these units can prove very costly.

Even when lacking Blast Furnace and Bloodlines, Paladins are superior to generic Cavaliers, boasting +20 hit points and +1 pierce armor (while attacking slightly slower). Byzantine Paladins, Burgundian Paladins, and Lithuanian Paladins without Relics should not be avoided if the situation demands.

Celt Paladins are a fringe case, lacking Bloodlines and Plate Barding Armor, but having Blast Furnace, making them usable mostly against melee units.

Despite lacking Bloodlines, the Franks have some of the strongest Paladins in the game due to their civilization bonus which grants them +20% HP, making them very powerful against melee (especially Halberdiers) and ranged units and excellent at raiding. They also have the most easily massed and upgraded Paladin once Chivalry is researched, which increases the work rate of Stables by 40%.

The Huns have the second fastest training and upgrading time as a result of their team bonus which makes their Stables work 20% faster, which affects them from the start of the game, while Chivalry needs a Castle and extra resources to be effective.

Before update 51737 the Lithuanians can potentially have the strongest Paladin in melee combat as one of their civilization bonuses gives +1 attack for each Relic gathered, with a maximum of +4. Because of this, their damage output can be greatly devasting against most units and buildings, however, even with 22 attack (the maximum they reach), they still need four hits to kill generic Halberdiers. Now they have lost Blast Furnace, meaning they must collect at least two Relics to compensate for it. With four Relics collected, they still equal Teutonic Paladins in a duel with a faster speed.

Despite lacking Husbandry, the Cumans have the fastest Paladin in the game, due to their civilization bonus granting them +15% movement speed, allowing them to chase down enemies and disengage from fights easily, as well as being extremely useful to raid and disrupt the enemy economy.

The Teutons also lack Husbandry, but have the Paladin best-suited for prolonged melee, thanks to their civilization bonus that provides +2 melee armor, which enables them to survive one more hit from Halberdiers and against low-attack units like Hussars. The team bonus also makes them more resistant to conversion.

The Persians have one of the most effective Paladins at countering ranged units, as their team bonus grants +2 attack against Archers.

The Burgundians also lack Bloodlines, but since their upgrade is 50% cheaper, they have the fastest appearance for Paladin. Also, the Cavalier upgrade is available in the Castle Age, meaning less time to upgrade, since most players will upgrade it during the Castle Age. The Cavalier upgrade is also cheaper. And unlike the other civilizations with strong Paladins, the Burgundians can use them in 1v1 more easily. In team games, their Paladins are very powerful in the early Imperial Age, but become weaker when the opponents finish the upgrade.

Comparison in the Post-Imperial Age[]

The Knight line, with the Paladin on the right 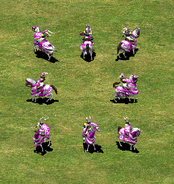 A group of Paladins 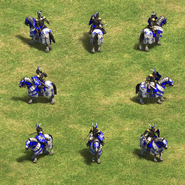 A group of Paladins in the Definitive Edition 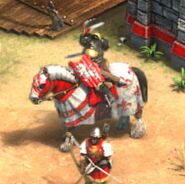 A Paladin in the Definitive Edition 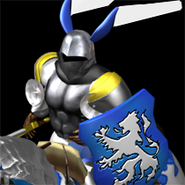 A render of the Paladin model

How Good Are Teuton Paladins? AoE2